May 4th – Napa, California—It’s been the biggest wine trend of the past decade: celebrity wines. 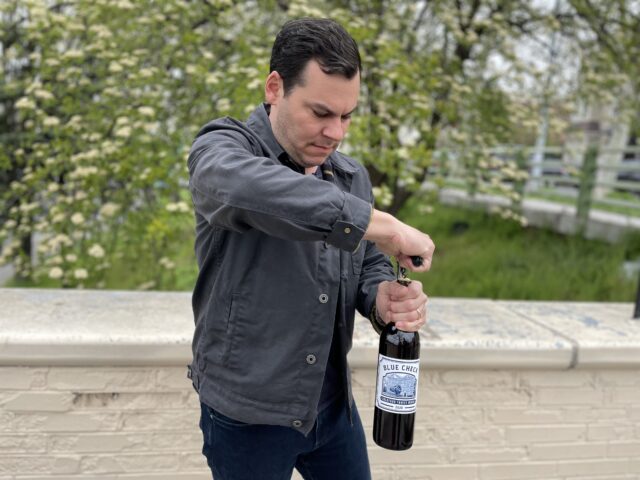 At a time when the wine world is talking about nothing but natural, hand-crafted, artisanal wines, celebrities with no winemaking background have grabbed a significant share of the American retail wine market.

The result is that many wine retail shelves are dominated by high-priced wines made from anonymous juice by an unnamed winemaker, whose only claim to legitimacy is the celebrity name attached.

“There’s even a wine app dedicated to hooking you up with celebrity wines,” said investigative drinks writer Aaron Goldfarb. “After I discovered more than 300 entries — Lisa Vanderpump has a wine?! — I realized that launching a celebrity wine must be easier than it looks.”

To prove the point, Goldfarb decided to create his own celebrity label — despite the fact he’s not a celebrity.

It turned out to be not just a simple process, but also a fast one. Launching his own brand took two months, at a total cost of $300. His celebrity Blue Check wine, which now retails for $50 a bottle, went on sale at Seelbach’s in Washing D.C. on 28 April 2022 — and was completely sold out within 48 hours.

“What I learned is that anyone can do this,” said Goldfarb. “Whether you’re famous or not.”

Goldfarb was reporting for The Drop, the independent editorial arm of the Pix wine search platform. Pix’s mission is to democratize wine and what Goldfarb’s reporting proved is that everyone can be a celebrity in the confines of their own wine rack.

“You don’t have to own a vineyard, employ a winemaker, or even have good taste,” said Goldfarb. “You just need a few hundred bucks and an internet connection.”

To be clear, he went on, there are celebrities with integrity who make great wine with passion and dedication.

“They get their hands dirty,” he said. “But more and more minor celebrities are launching wines based on nothing more than anonymous bulk wine that they bottle under a fancy label.”

So why buy someone else’s vanity project, when you can create one of your own?

“The only downside is the stress of updating your Instagram page,” said Goldfarb.

Full details of how Goldfarb created his own celebrity wine can be found here. He’s also available for interviews.

“I am willing to help anyone on their wine journey,” he said. “Also, it might help me sell more wine.”

For interview requests, or to find out more about Goldfarb’s project, The Drop or the Pix search engine, email [email protected].

Pix is the world’s first wine discovery platform that makes buying the right wine for the right occasion a delight — and champions the wine industry by making it more equitable for vintners and retailers of all sizes to sell. With a clever wine search engine alongside inviting articles written by diverse voices in the wine world, Pix provides curious wine drinkers with a joyful and pretense-free way to explore wine, no matter their expertise or their budget. The company was founded in Napa, CA by an industry-vetted team spanning wine and tech, led by digital wine innovator Paul Mabray.