(March 3, 2020; Napa, CA)—Dalla Terra Winery Direct® announced today that Tenuta di Capezzana has joined its portfolio of family-owned Italian estates. Capezzana is located 12 miles west of Florence in the Carmignano sub-zone, one of the oldest recognized wine producing areas in Tuscany. The winery is comprised of a Renaissance-era villa with historic cellars dating to the 16th century, a Frantoio for olive oil production, a Vinsantaia where the estate’s legendary Vin Santo is produced and a fermentation cellar built in 1938 by architect Giovanni Michelucci. The estate’s landholdings expand approximately 1,655 acres with 198 acres of vineyards and 345 acres of olive groves. In 2009, Capezzana began farming organically and achieved official certification for the vineyards and wines in 2015. The historic Capezzana estate is in the hands of Beatrice, Benedetta and Filippo Contini Bonacossi, the fourth generation, and Serena and Gaddo Contini Bonacossi, fifth generation, who oversee all aspects of the property. Dalla Terra will be the winery’s sole USA agent. 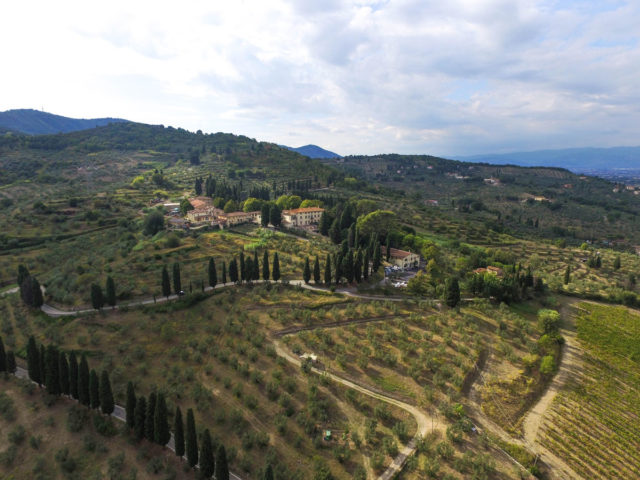 “Few wineries in the world possess the stature, respect and devotion that the Contini Bonacossi family has cultivated and maintained with their Tenuta di Capezzana property in Tuscany’s Carmignano region,” says Scott Ades, President of Dalla Terra Winery Direct®.

Carmignano has a long and reputed history dating to the 14th century and was one of the first designated wine regions in the world, established by Grand Duke Cosimo III de’ Medici in 1716. Catherine de Medici, while Queen of France, had clippings of Cabernet Sauvignon – then known as uva Francesca – sent to Carmignano from Bordeaux thereby establishing a new varietal tradition in the region. Much of those plantings disappeared with the phylloxera epidemic, but Cabernet was replanted in the 1950s. When Carmignano received DOC status in 1975, it became the first sanctioned wine to include Cabernet Sauvignon in Tuscany. A few other French varietals are planted in the region, but Cabernet is the preferred complement to their Sangiovese. In order to qualify as a Carmignano DOCG wine, the blend needs to include a small amount of Cabernet Sauvignon (10-20%).

“A monument of the best Tuscan viticulture and hospitality, and synonymous with the appellation that they define, Tenuta di Capezzana is truly an icon that fits perfectly within the Dalla Terra portfolio, possessing every criteria we could hope for in our winery partners: history, quality, innovation, loyal market presence, an appellation leader and, most of all, a wonderful historic family,” says Dalla Terra founder, Brian Larky.

Ancient Etruscan artifacts have shown that grapevines were cultivated in the area for wine production over 3,000 years ago. The first reference to Capezzana dates back to 804 A.D.

Over the centuries, the estate passed through several families. The story of today’s Capezzana starts when Count Alessandro Contini Bonacossi and his family returned to Italy after living in Spain and purchased the estate from Raimondo Franchetti’s widow, Sara de Rothschild, in 1920. Not content with this original holding, Count Alessandro acquired the two neighboring farms, Poggetto and Trefiano, dividing the property into three distinct estates. The family became dedicated to the production of high-quality wine and olive oil with the first vintage of Villa di Capezzana dating back to 1925.  Augusto, Alessandro’s son, took over the management of the estate and in 1945, his son, Ugo, joined him. Ugo had completed a degree in Agriculture before heading to the War, and he was devoted to increasing the quality of the family’s wines – a notable endeavor during a time when most producers were still selling their grapes by weight. It was Ugo’s vision that gradually moved the estate away from sharecropping towards a modern-day winery.

Carmignano was originally incorporated into the Chianti Montalbano appellation, however, with a unique microclimate, soil composition and the use of international grape varieties, the Carmignano wines were very different than the Chianti being produced by their neighbors. Due to the tireless work of Count Ugo, who spearheaded the efforts, DOC status was finally granted to Carmignano in 1975. In 1988, the appellation finally received DOCG recognition, making it the smallest DOCG in Tuscany.

Founded in 1990, Dalla Terra Winery Direct® is a direct importer and national agent of a select group of leading, family-owned, estate wineries in Italy. The name Dalla Terra means Of the Earth in Italian and represents a commitment to work alongside estates that have achieved reputations for top quality production in their respective regions or appellations. The wines they produce are authentic, indigenous and characterful, while embracing progressive viticulture and winemaking.

Dalla Terra’s ability to adapt to an ever-changing marketplace is due to its highly curated portfolio and innovative business model. By limiting its portfolio, and partnering with only the highest quality producers, Dalla Terra ensures that its portfolio will be a comprehensive source of remarkable Italian wines. The quality of the portfolio is complemented by Dalla Terra Winery Direct’s business model which guarantees value by circumventing the traditional national importer expense of the three-tier system and enables their distributor partners to buy directly from each producer.  This results in a competitive price advantage and greater value to the consumer for some of the most iconic and significant producers in Italian wine. For more information on Dalla Terra and the wineries they work with, go to www.dallaterra.com or call 707.259.5405.