The Kincade Fire struck the Geysers in northern Sonoma County two years and two weeks after the Tubbs fire started in Calistoga. The two fires were both blown southwest by high winds. While the Tubbs fire moved into populated Santa Rosa, the Kincade Fire threatened agricultural areas belonging to winegrowers and wineries.

“Two fires in two years has certainly been a challenge,” says Rick Toyota, Vice President of the Alexander Valley Winegrowers and Vice President of Direct-to-Consumer for the Family Coppola. “Even though most of the harvest was in before the fire started, there was a financial impact for some of our members.”

Because the Kincade Fire hit Alexander Valley, Knight’s Valley and Chalk Hill, it affected three times as many agricultural workers as did the 2017 fires. “The Cabernet Sauvignon and Merlot are the last off the vine, says Karissa Kruse, President of the Sonoma County Wine Grape Commission. “Though less than 5% of grapes, for some growers, especially those with only 10 acres, it was their whole harvest. And without power, getting access to run payroll was impossible. We reopened our Grape Growers Foundation and gave $500 gift cards to ag families who evacuated and needed to buy groceries.”

“It’s a broader issue than the fires,” Rick points out, “it’s the weather pattern in the middle of harvest. The high winds that cause the fires are looking like a seasonal event. That means the fire is the symptom, but not the problem.”

“We can’t always prevent mother nature,” agrees Karissa, “but agriculture can be part of the solution. Our vineyards act as a natural fire break. Folks may have lost vines or posts at the end of rows or irrigation materials, but vines are alive, and the vineyards help stop the fire.”

“We work with wine regions across North America, but this is in our backyard, so it’s especially important to us,” he says. “We saw in 2017 how great it was for people to gather at the WIN Expo and see each other for the first time after the fires — to find out what happened to everyone. In some small way, it was part of the healing process.” 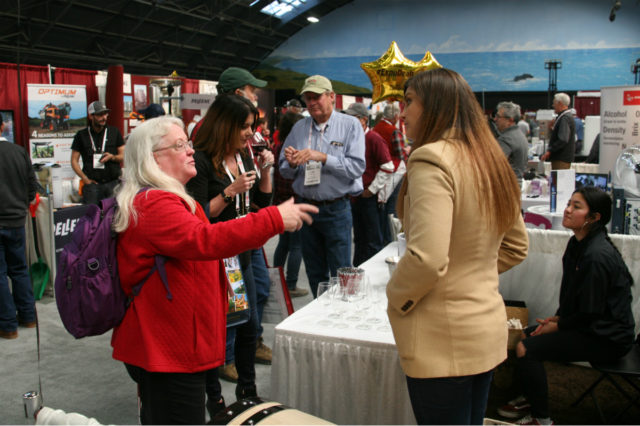 Rick believes the conversation at WIN Expo won’t be the fires, but how to prepare for power shutdowns and business disruption. “We can’t talk about the fires without talking about power outages,” he says. “That is the bigger elephant in the room. That’s where the resources will have to go. Will crop insurance or property insurance increase? How much will generators cost?”

Tourism will be another hot topic. Over 80 wineries in Alexander, Dry Creek and Russian River Valleys will feel the loss of this year’s November 2nd and 3rd Wine Road Food and Wine Affair. Beth Costa, Wine Road’s Executive Director, said, “We just could not pull off a food event without power and gas for cooking.”

“Part of the challenge is the national press,” Rick notes. “The press is here for the fire and then they’re gone. As far as the rest of the country is concerned, Sonoma County has completely burned up.”

Beth agrees, adding, “I heard from so many customers who said, ‘No way! The LA Times story that said wine country was in trouble is not painting an accurate picture.’”

“Sonoma County is 1 million acres in size,” Rick adds. “Even though the fires were large, they affected only a handful of the 425 wineries in the county. Most wineries are already — or are soon to be — open.”

Beth has begun hosting groups of journalists. “We want journalists to visit so they can paint the actual picture of Sonoma County’s Wine Country,” she says, “not a sensationalized one.” Wine Road is also promoting ‘#SipSonoma and tapping into their Wine Road Ambassadors to spread the word. “If you can’t be here,” she says, “you can still support our wineries by buying Sonoma County wines. We want to keep Sonoma top of mind for world-class wine.”

Soon after the fires, Sonoma County Tourism, the Board of Supervisors, Chambers of Commerce, and wine and agriculture associations began meeting to build consensus on marketing. “We’re all pulling together to solidify the message,” says Rick. “It’s a joint effort.”

“It’s important that the North Coast Wine Industry come together and support each other after the Kincade Fire,” adds George. “I see the WIN Expo as a good place to do that and talk about how to be better prepared for the future. We’re offering free passes to the WIN Expo trade show so people can use it as an opportunity to rally together and support the vendors hurt by the fire.” They’re also offering discounts to the educational sessions, which include smoke taint and the state of the North Coast wine industry and the impact of climate change.