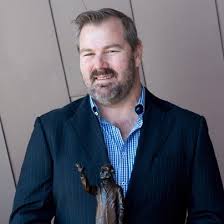 16th December 2020 – Wines by Geoff Hardy’s winemaker Shane Harris has been named as Winestate Magazine’s Australian  Winemaker of the Year 2020, for the third time in eight years.

Shane is the first winemaker to be named Winestate Magazine Australian Winemaker of the Year  three times, having previously won the award in 2012 and 2018.

The Winestate magazine publication noted that of the 27 wines submitted during the year that “24  wines made by Harris scored 4.5 or 5 stars, all judged completely blind by separate independent panels, something Winestate’s managing director Peter Simic described as “an extraordinary  achievement”.”

Shane has been the winemaker for Wines by Geoff Hardy since 2009 and acknowledges the  importance of Geoff’s passion for viticulture and for growing only the best possible fruit when producing the best possible wines.

“Awards like these start in the vineyard, with Geoff growing outstanding fruit at our K1 by Geoff Hardy  vineyard” Shane said.

Shane is a true artisan and craftsman, relying on the vines to translate the unique story of the  vineyard into something tangible. He sees his role as “not losing the message between picking the  grapes and opening the bottle”.

Before entering the wine industry, Shane was a chef by trade and still uses these skills to complement  his winemaking philosophy. “Everything I do is to preserve and protect what each variety and  vineyard has to offer. Sensitivity and a respect for the raw ingredient is something that is constantly  drilled into you when training as a chef and for me it remains the starting point for all winemaking decisions”.

Winestate Magazine is Australia’s oldest wine publication and its tasting panels are made up of wine industry peers who taste more than 10,000 wines across the year.

This award ensures that the tumultuous year that has been 2020 ends on a high for Wines by Geoff  Hardy, and is a great recognition of the quality of wines made by Shane & Geoff.

Other accolades received during 2020 include:

About Wines by Geoff Hardy

from fruit grown at Geoff’s K1 vineyard at Kuitpo in the southern Adelaide Hills. Additional wines are  released under the Hand-Crafted and GMH ranges.