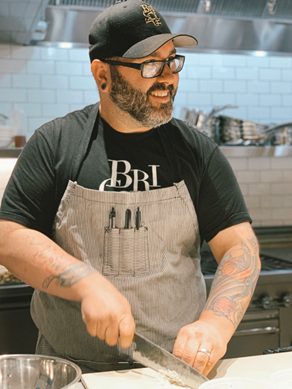 WINDSOR, Calif. (April 3, 2020) – Bricoleur Vineyards, an exciting new winery, tasting room, culinary showplace, retreat and event venue in the idyllic Russian River Valley, is pleased to announce the appointment of Shane McAnelly to the position of executive chef.  McAnelly will head the winery’s new culinary program, set to launch after May 4th and the latest addition to the winery’s many attractions, delighting guests with innovative and approachable dishes designed to highlight Bricoleur Vineyard’s 12 stand-out varietals from prized vineyard sites.

“It is a privilege to welcome Shane to our Bricoleur Vineyards family,” said Chief Executive Officer and founder Mark Hanson.  “He brings amazing expertise and a wealth of knowledge to our team and we are very excited to see and taste what he has in store for our much-anticipated culinary program.”

A sample of the Sip and Savor tasting flight experience features the 2017 Estate Pinot Noir paired with duck rillette, beet “chicharron,” radish and Russian River Valley raspberry.  Hosted in the estate’s Winery Barn, Bricoleur’s Sip and Savor experience is priced at $55 per flight and is available by reservation only.  Sip and Savor is the perfect introduction to the winery’s new culinary program.

For a more interactive and cutting-edge experience, Atelier Bricoleur offers a front row seat in the brand-new kitchen in the Winery Barn as McAnelly and his skilled team prepare a custom-made, seven-course meal from the best of Sonoma’s bounty. Pairings include the 2018 Kick Ranch Viognier with black truffle goat cheese scarpinocc, fennel pollen, preserved kumquat, chervil and estate honey.  Atelier Bricoleur is priced at $195 per person and is available by reservation only, Thursday through Monday, from 10 a.m. to 3 p.m.

McAnelly’s culinary awakening came early, baking with his mother and grandmother in the family kitchen.  He started his career in the kitchen at The Blackhawk Grille in Danville, California.  After 5 years working his way up the ranks he moved on to Garibaldi’s restaurant in Oakland as the sous chef.   It is here that he began to build the strong relationships with local farmers and purveyors that continue to this day.  Three years later, he was promoted to chef de cuisine at Garibaldi’s and began expanding his ties with local farmers into wine country in order to find the best local ingredients to use in his dishes.

In July of 2010, McAnelly took the position of executive sous chef with the opening team at Zero Zero restaurant under Bruce Hill in San Francisco.  He moved on to Va de Vi restaurant in Walnut Creek in 2011, taking the role of executive chef.  He next moved north to Wine Country with his family to open Chalkboard restaurant in Healdsburg.  Under McAnelly’s direction, Chalkboard received a 3-star review from then San Francisco Chronicle critic Michael Bauer, as well as securing a coveted spot on Bauer’s list of Top 10 New Restaurants for 2013. While serving as the executive chef at Chalkboard, McAnally and his team helped open The Brass Rabbit, a pasta house focusing on seasonal produce.  In May 2018, McAnelly hosted his first dinner in the prestigious James Beard House in New York City, choosing the theme “It’s Always Sunny in California.”

Bricoleur Vineyards was founded by San Francisco Bay Area natives Mark and Elizabeth Hanson and daughter Sarah Hanson Citron.  The word Bricoleur (bree-ko-LER) is French and refers to “one who starts building something with no clear plan, adding bits here and there, cobbling together a whole while flying by the seat of their pants.”  The beautiful 40-acre estate features a winery barn, pavilion, rose garden featuring 85 different varietals, bocce ball court, several view patios, two ponds, an estate villa and a refurbished milk barn.  The pristine property, charmingly nestled in the Russian River Valley countryside, was meticulously designed by the Hansons to serve as an ideal location for intimate gatherings with friends and family, corporate retreats, or as a home base for wine country touring.

Pending public safety allowances, the winery plans to open officially on Saturday, May 2. , Bricoleur Vineyards will be open to the public Thursday through Monday from 10 a.m. to 5 p.m., with reservations required for all wine-paired culinary experiences. A rotating series of events and programming will be announced throughout the year.

Located at 7394 Starr Road in Windsor, Bricoleur Vineyards can be reached by calling (707) 857-5700, emailing [email protected] or visiting www.bricoleurvineyards.com.

Bricoleur Vineyards is a unique wine country retreat nestled in the Russian River Valley in Windsor, California, about an hour north of San Francisco.  Visitors can visit the newly renovated Winery Barn to enjoy Bricoleur Vineyard’s hand-crafted, estate-grown wines or an elaborate, wine and culinary experience guided by celebrated local Executive Chef Shane McAnelly. The 40-acre estate features a number of picturesque gathering places to relax and create memorable experiences, such as a picnic in the stone pavilion overlooking the rows of Chardonnay, strolling in the rose gardens admiring the vast array of colorful and fragrant roses, playing a friendly game of bocce ball, or simply enjoying one’s family and friends while watching the ducks and native birds by one of  two serene ponds  Family owned by Bay Area natives Mark and Elizabeth Hanson and daughter Sarah Hanson Citron, Bricoleur Vineyards is Sonoma County’s hidden gem, dedicated to enjoying the beauty of Sonoma County while building meaningful connections and communities.

For Giving Tuesday, Bricoleur Vineyards Offers Gifts That Give Back